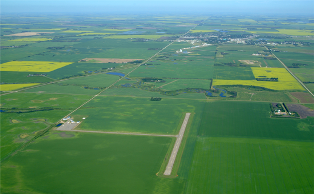 Runway Conditions: There is limited winter maintenance on weekends/statutory holidays

The Melfort Airport – Miller Field is operated on the honour system. Envelopes and a drop-off box are accessible from outside and inside the terminal building. The code to access the building is your ELT code. If you require an invoice or receipt, please advise the City:
Phone: (306) 752-5911
Mail to: Box 2230, Melfort, SK S0E 1A0
E-mail: [email protected] 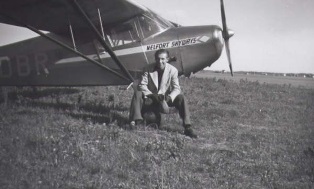 Miller Field
The Melfort Airport has been named Miller Field in memory of Major Stanley J. Miller RCAF, born in Melfort in 1924 and passing away in Scarborough, Ontario, in September, 2007.
Stan devoted his entire life to aviation as a wartime pilot, flying instructor and mentor to hundreds of student pilots. During WWII Stan served with Bomber Command. On returning to civilian life he operated an aviation charter company, Melfort Skyways (above photo), in 1948. During the Korean War he rejoined the RCAF and served as an instructor until he retired with the rank of Major, spending 27 years in total in the military.
In his next career, he spent 17 years with Seneca College in Toronto, from which he retired as Chairman, Aviation and Flight Technology. Following his retirement from Seneca, Stan remained active as an instructor, as a pilot of vintage aircraft at air shows, and as a MOT Flight Test Examiner.
On a different side of his flying career, Stan flew a camera-equipped Harvard Mk. 4 for the movie Iron Eagle IV, which was based out of Downsview Airport in North Toronto, and starred Lou Gossett Jr.
Throughout his career, he was very active with the Air Cadet movement and was a much-respected Honourary Life Member of the Air Cadet League of Canada. He began the first Air Cadet squadron in Melfort in 1946. Over an active flying career that spanned 64 years, Stan imparted piloting skills to over 700 students, flew dozens of aircraft types and amassed over 19,000 hours of flight time.