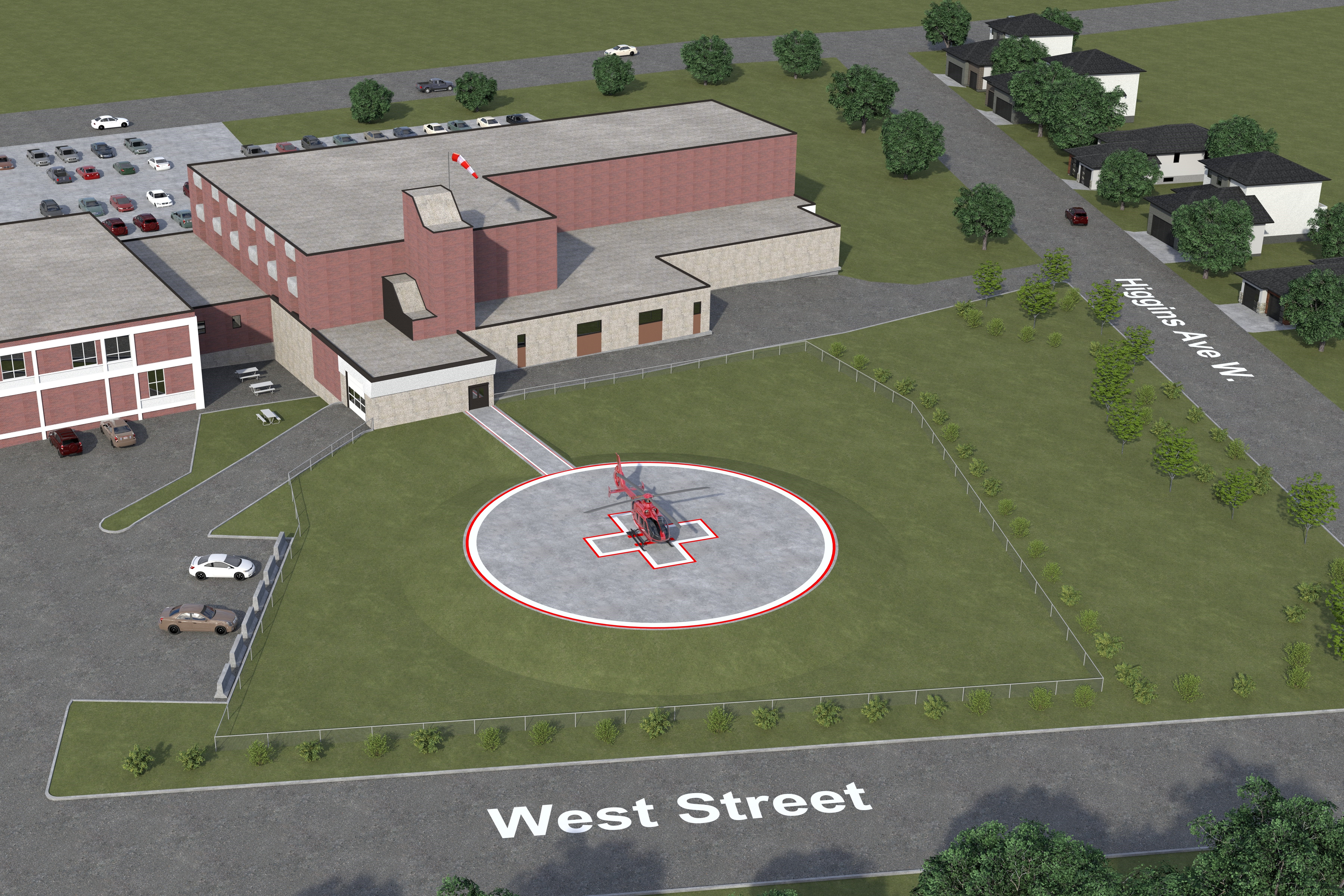 Melfort Hospital Heliport Fundraising Campaign
You can help support this fundraising campaign by:

Melfort Heliport Quick Facts
• The Melfort Hospital serves a referral population of approximately ­­­­12,200 people and currently does not have a heliport. All patient transfers occur by ground EMS directly or through the Melfort Airport via fixed wing air ambulance or STARS service.  In 2019 STARS landed in Melfort 25 times.  For year ending March 31, 2018 STARS transferred 13 patients from Melfort, Air Ambulance transported 23 patients and ground ambulance transferred 15 urgent cases. (Ground ambulance also transferred about 159 non urgent cases in 2018.)
•The City of Melfort proposes to develop a heliport beside to the Melfort Hospital.  The landing area would be a certified area used by STARS for the transport of patients from the emergency department at the hospital. The proposed heliport would be an important service for our growing community. The greatest risk for patients being transported is during handover. With STARS service, the care team can come right to the patient, get report from the team providing care and transfer direct to tertiary care in Saskatoon.
• A helipad would save STARS time to patient as they would be able to land right at the hospital. These minutes are often critical for the patient.  No EMS transfers would be required which would free up EMS to respond to other calls and reduce the cost to the patient as they would not be billed for an additional transport. The Melfort Heliport will shorten transport time to and from the Melfort Airport by approximately 30 minutes plus a further 20 minutes time is saved on transport time to Royal University Hospital as the helicopter will land right at the Jim Pattison Children’s Hospital in Saskatoon as opposed to the airport where ground transportation is again required.
• The most significant impact will be on the patient who is able to benefit from a timelier transfer with fewer handovers along the way.  Patient care will be improved since the heliport will reduce the number of patient handovers between referring and receiving teams. While best efforts are made by the professionals involved in handing care of the patient to another team, the process carries inherent risks for the patient in the areas of communications between care teams and continuity of care for a critical patient.  STARS transport via the heliport would reduce these risks to the patient and improve patient stability.  Speed is not always the only factor.  Sometimes the level of care provided by the STARS crew may be beneficial to the specific needs of patient, versus the crew of a ground ambulance.
• The Melfort community is a growing urban center that currently requires a 2 hour ambulance trip to the Saskatoon Royal University Hospital. This is very dependent and weather conditions and City traffic delays can also impact estimated times. The introduction of a heliport will improve access to tertiary services for those in greatest need.  The heliport will help ensure patients receive the care they need, when they need it, regardless of where they are located.  The proposed heliport will improve the timely transfer of patients via STARS from Melfort to Saskatoon’s Royal University Hospital.  A reduction in the transfer of patient care between ground ambulance and STARS crews at the airport will positively impact quality and patient safety.
• Positive patient outcomes would be expected to increase for patients where time is critical. While not a factor in all STARS flights, the impact can be dramatic when it is.  Resources will be released for other priorities including STARS air time, ground EMS, and fixed wing resources.  The respective transport physician will be able to make the decision based on patient need and available resources.
• The project is being completed in the summer of 2020 at a cost of approximately $600,00.00. The project costs will be funded entirely by private donations from community minded individuals, businesses and organizations. Construction is anticipated to commence as soon as the funds have been raised.  Funds raised in excess of the construction project will be turned over to the NCHCF unrestricted.